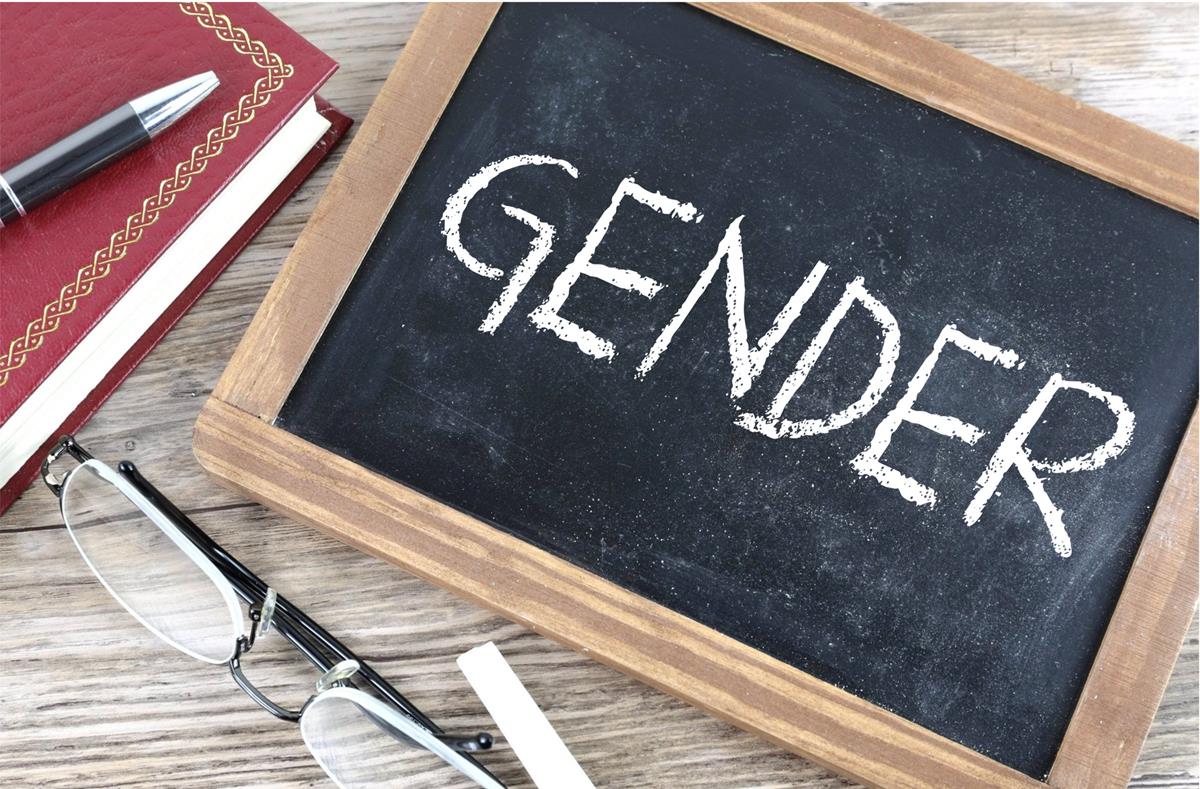 The primary aim of international relations (IR) scholars and practitioners alike is to study, explain, and facilitate interactions between actors in the international system in hopes of addressing global issues. As such, diversity in perspectives is vital for the field. Yet, inequities based on gender still persist in both theory and practice, and women remain underrepresented in IR theories, teachings, and policymaking processes that constitute international relations. Data from Teaching, Research, and International Policy (TRIP) Project’s 2017 U.S. Faculty Survey provides a snapshot of this imbalance, and identifies areas that can be expanded upon to be more inclusive of historically ignored perspectives. Academia ultimately influences the approaches our future professors, politicians, diplomats, and public servants will adopt in their work. To maintain an insular network of scholars today is to promote gender inequality in all avenues of political science. Ultimately, international relations cannot truly become an equitable space until scholars and practitioners address and engage with issues relating to gender and privilege in the field.

The 2017  U.S. Faculty Survey collected data from a total of 1,632 respondents, with 479 (29.7%) identifying as female and 1,134 (70.3%) identifying as male. This imbalance in the survey data reflects the IR discipline as a whole, which is largely male-dominated due to the patriarchal nature of academia (Crawford and Windsor). In fact, in 2008, only “26% of the 13,000 political science professors in the United States” were women (Sedowski and Brintall 2007). This is a stark contrast to 1980, when women constituted 10.3% of political science faculty in the United States. However, the percentage has only increased marginally in recent years, with 28.6% of political science faculty being women (Mershon et al. 2015). This increase is reflected in the TRIP data: in 2006, women made up 23% of the survey respondents, compared  to 29.7% in 2017. The increase could be an indication of more women entering the field. However, in the 2017 faculty survey, 7.52% of women said that they were not an IR scholar, in contrast with an even smaller 3.79% of men. Thus, even though there has been an overall increase in female scholarship, the playing field is not yet equal when comparing the number of women to the number of men in the discipline.

Citation bias, which is the tendency of men to refer to and cite other men rather than women in their academic works, hinders women’s professional advancement. In “Citation Count Data and Faculty Promotion,” Amanda Murdie presents survey data collected from 55 political scientists, 68.5% of which stated that their institution used citation data “half the time,” “frequently,” or “all the time” when promoting faculty members. The emphasis that is placed on citations in the professional world means that males, who are more likely to be cited due to the citation bias, are more likely to secure higher-ranking positions. This is evident in TRIP’s data, which shows that the title of assistant professor is the most held teaching position among women (31.94%), as opposed to the rank of full professor for men (35.71%). To combat citation bias, journals should diversify the pool of reviewers to include more women. They should also adjust submission guidelines, so that works with extreme gender citation bias will be reworked to include marginalized voices, or rejected if these criteria are not met (Ainley, Danewid, and Yao 2017).

While traditional IR theory is “gender-blind,” the feminist paradigm emphasizes the role that gender, as a socially constructed identity, and plays in “shaping the process of global politics” (Smith 2018). By doing so, feminists strive to shed light on issues that mainly women face, challenge gender norms, and study the intersectionality of international relations. Knowing this, it is unsurprising that of the group of respondents who selected feminism as their primary paradigmatic approach in their studies of IR, 88.9% were women.

Data from the 2017 U.S. Faculty Survey shows that there is also a gender imbalance within the paradigms that researchers employ. The most popular paradigm among women was constructivism, at 26%; yet, this percentage was much lower among men, at 17.4%. The percentages for constructivism and liberalism were very close among men, with 16.5% of men preferring the latter. On the other hand, only 11.9% of women identified as liberal. Realism was the most popular paradigm among men (23.4%), compared to only 10.1% of women identifying with realism. What drives men towards this paradigm is unclear, but realism emphasizes power, anarchy, and rationality, which are traditionally “masculine” characteristics, and views states as the primary actors (Etten 2014). Thus, realism deemphasizes the individual and does not consider which social group is in a position of power, as well as the implications that it may have on the priorities and interests of the state, which contrasts with the nontraditional paradigms that women are more likely to adhere to.

The higher inclination of women to adhere to nontraditional paradigms in comparison to men might be attributed to the personal experiences and challenges that they have faced as a marginalized population, which in turn shape their views in the gendered field of IR. This would also explain why, among those who selected gender as their main area of research in IR, 76.5% were women while only 23.5% were men. This further emphasizes a pattern of female domination in “nontraditional” paradigms. Gender is about the roles and norms that are “intrinsically woven into and practiced in our daily lives,” and gender studies is the study of “production, reproduction, and resistance to [these norms] that produce inequality” (Boise State University). They recognize the gaps in the traditional schools of thought, and therefore wish to fill them in by adopting a more holistic paradigmatic approach. 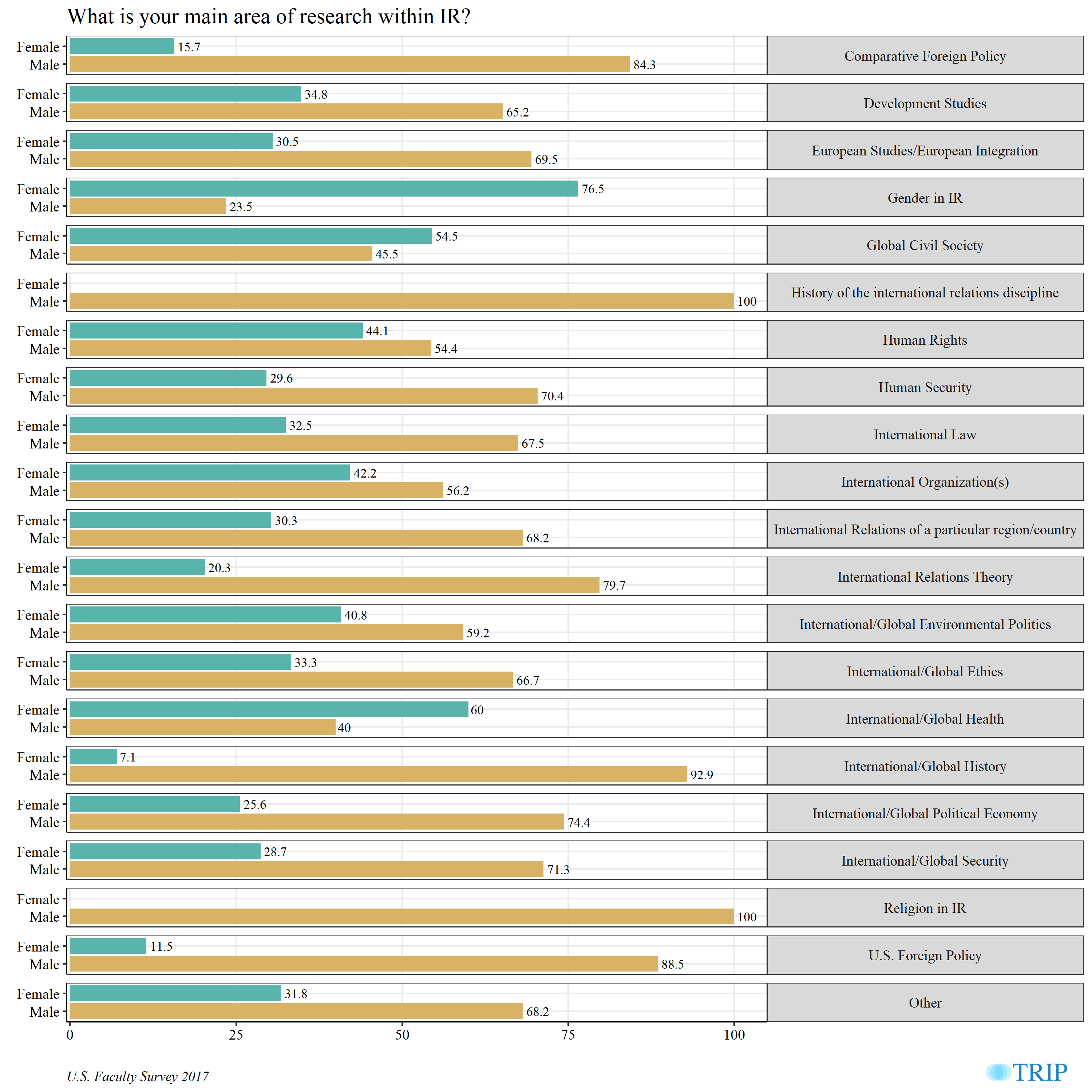 As for the other areas of research, there were also more women scholars and practitioners in the areas of global civil society (54.5%) and international/global health (60%). When further broken down, among women, 7.1% selected human rights as their main area of research, as opposed to 3.6% of men. Similar statistics can be seen in areas of research such as development studies.

There is a common theme among these areas of research: they all specifically deal with humanitarian issues. Thus, the reason women adhere to nontraditional paradigms more than men is also applicable to the question of why they focus their research on such areas: they all analyze and deal with systemic inequities that are similar to the gender-based challenges that they as women face. Daniel Maliniak, Amy Oakes, Susan Peterson, and Michael Tierney explore this imbalance, citing Ann Tickner: “women’s status in society helps them to see women’s (and other minorities’) marginality in scholarship (Tickner 2001). It is imperative that such holistic approaches and perspectives are brought to the forefront of IR academia.

Overall, permeability of perspectives that challenge the status quo is imperative in the field of international relations. The rising number of women pursuing IR careers, as well as emergence of nontraditional contemporary paradigms, show that the discipline has the potential to become a more equitable space. Yet, the problem is still a pronounced one— as a woman in my third year of studying government and economics, the lack of diversity among my peers and in the scholarly works that I read in my courses is jolting. It is discouraging to see that a woman’s work is the topic of discussion in many of my classes only when the topic of diversity arises. When discussing the most influential and impactful authors and articles in the discipline, male scholars such as John Mearsheimer or Joseph Nye are the only names I hear. There is much room for improvement, and scholars should integrate works written by women in curricula and expand the professional opportunities available to women. It is also imperative that faculty end the cycle of insularity in IR by encouraging their students to explore marginalized perspectives in IR, so that the cycle can be broken within the new generation of scholars, policymakers, and faculty.