International Relations scholars disagree with the American public on crucial national security issues like cybersecurity, terrorism, and nuclear weapons. While the American public is fairly evenly distributed along the ideological and educational spectrum, IR scholars are highly educated and the majority consider themselves to be liberal on social and economic issues. 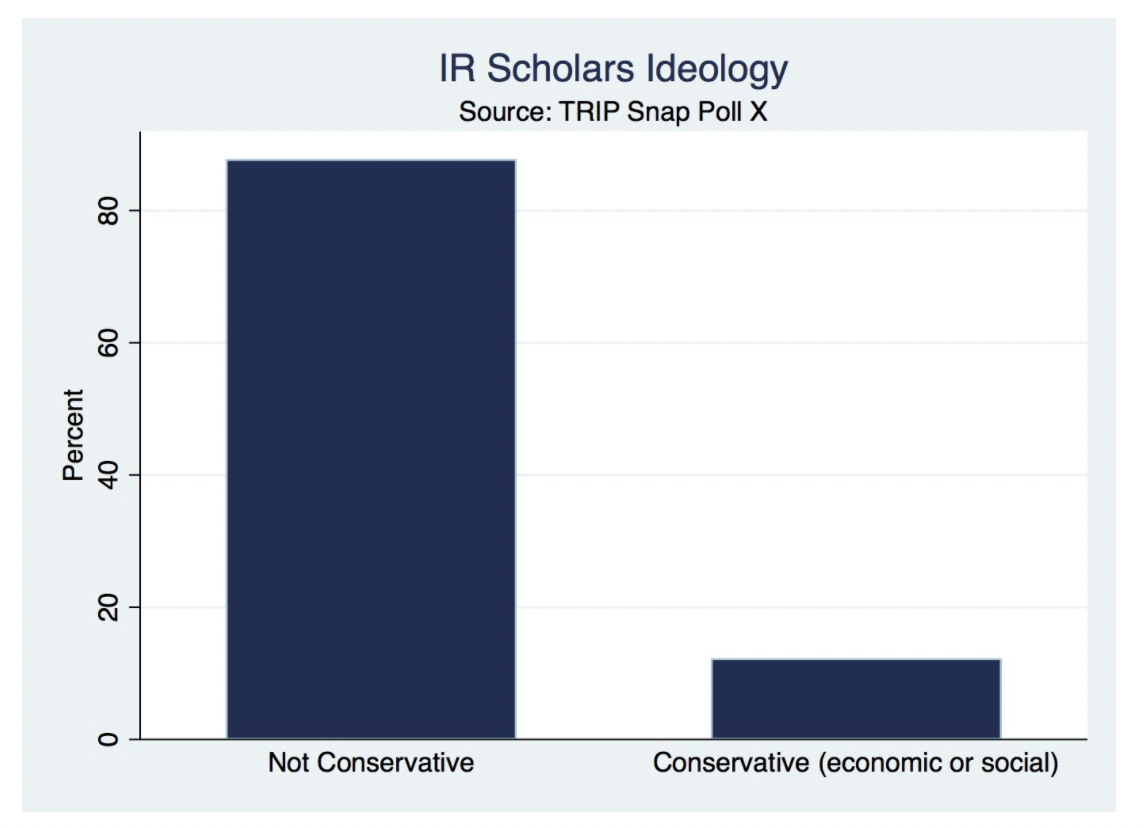 The ideological imbalance in International Relations must be considered when studying public-expert gaps. On some issues, IR scholars may think similarly to the public and simply arrive at different conclusions based on their ideology. On other issues, we may find strong evidence of a persistent gap between scholars and public opinion, regardless of ideology. A closer look at the differences between conservative and liberal IR scholars could provide needed insight on the public-expert divide.

The Teaching, Research, and International Policy (TRIP) Project’s 2017 Snap Poll includes responses from 1,395 IR scholars at U.S. colleges and universities. In our sample, though the majority of scholars identify as liberal, 181 scholars identified as (somewhat or very) conservative on economic or social issues. The large sample of IR scholars allows us to examine the ideological divide within the academy and assess the origins of the significant public-expert divide on national security issues. Below, I examine survey data on several relevant foreign policy issues to explore divergences in public-expert attitudes and the ideological divide among academic experts.

The ideological divide works in opposite directions for the public and scholars, but each is within the margin of error. The perceived threat of cyberattacks does not depend on ideology, as conservative and liberal scholars, similar to the public, generally agree that it is a serious foreign policy issue. A majority of both scholars and the public think cyberattacks are a major threat. While the public is more concerned, this aligns with our generally alarmist attitudes, supporting the conclusion that cybersecurity is a rare national security issue with common ground between conservatives and liberals, and experts and the public.

Three-quarters (74 percent) of the American public viewed ISIS as a major threat in 2017, but less than one out of six scholars agreed. Americans considered ISIS the second-biggest international threat to the United States, behind only cyberattacks from other countries. In the Spring 2018 Global Attitudes Survey, 62 percent of Americans rated the “Islamic militant group known as ISIS” as a major threat to the United States. Concern over ISIS may be declining, but it is still more than four times higher compared to IR scholars.

The salience and shock of international terrorism, and particularly ISIS, is more powerful on the general public than on IR scholars. The attributed motivation and social categorization of terrorist actors shape our understanding of and response to terrorist incidents. This public lens shapes government response, as we see substantial concessions after up to half of all suicide terrorist campaigns. The public-expert divide on the threat of terrorism thus has important policy implications.

There is a significant difference between conservative and other scholars on the perceived threat of ISIS and the significance of international terrorism to foreign policy. However, even conservatives, who tend to be far more worried by terrorism, are more than four times less likely to view ISIS as a major threat than the public. Ideology seems to influence beliefs (directly or indirectly) on international terrorism, but this does not explain the public-expert divide on the threat posed by ISIS and international terrorism generally. The divide may result from the additional foreign policy information scholars can access and their enhanced ability to process this complicated information.

In October 2017, one quarter (27 percent) of Americans surveyed by SSRS (for CNN) thought the U.S. should withdraw from the multilateral agreement intended to prevent Iran from developing nuclear weapons. When TRIP polled IR scholars in the same month, just 4 percent approved of President Trump’s proposal to withdraw from the Iran nuclear agreement.

While the question was posed to the public without mention of President Trump, withdrawal from the agreement, popularly known as the Iran Nuclear Deal, is typically framed in connection to Trump. As a result, the significant proportion of respondents supporting the nuclear deal appears to be a direct effect of support for President Trump generally. Of those who approve of President Trump, 46 percent think the US should withdraw. Of those who disapprove, just 16 percent think the US should withdraw.

Overall, there is a small ideological gap among experts for these key national security issues. However, the gap between the public and experts is much larger and appears to be unexplained by ideological differences. It is important to consider the ideological leanings of IR scholars, and while on some issues this appears to exacerbate the public-expert divide, the academy’s ideological imbalance does not explain the divergent perceptions of foreign policy issues between experts and the public.