The 2019 Women’s World Cup is underway, with opening festivities kicking off today, June 7th. The Cup is shaping up to be an exciting one – the United States, the favorite to win, has rising star Mallory Pugh, France is looking to win on their national soil, and New Zealand is looking to advance past the group stage for the first time. If one looks through all the fanfare, though, one finds that the World Cup has evolved from being more than just an international soccer match. The World Cup and its parent organization, FIFA, are now steeped in international politics, politics that affect all areas of FIFA’s decision-making.

Academics have talked about FIFA in relation to international politics before. Daniel Maliniak and Erik Voeten used TRIP data in a 2015 Monkey Cage article to see if the United States’ indictment of 47 FIFA officials was due in part to FIFA picking Qatar and Russia as host countries. The authors found that 62.8% of IR scholars supported the indictments, but “both scholars and the public think that the choice of Qatar and Russia as hosts increased the likelihood of the indictment.” 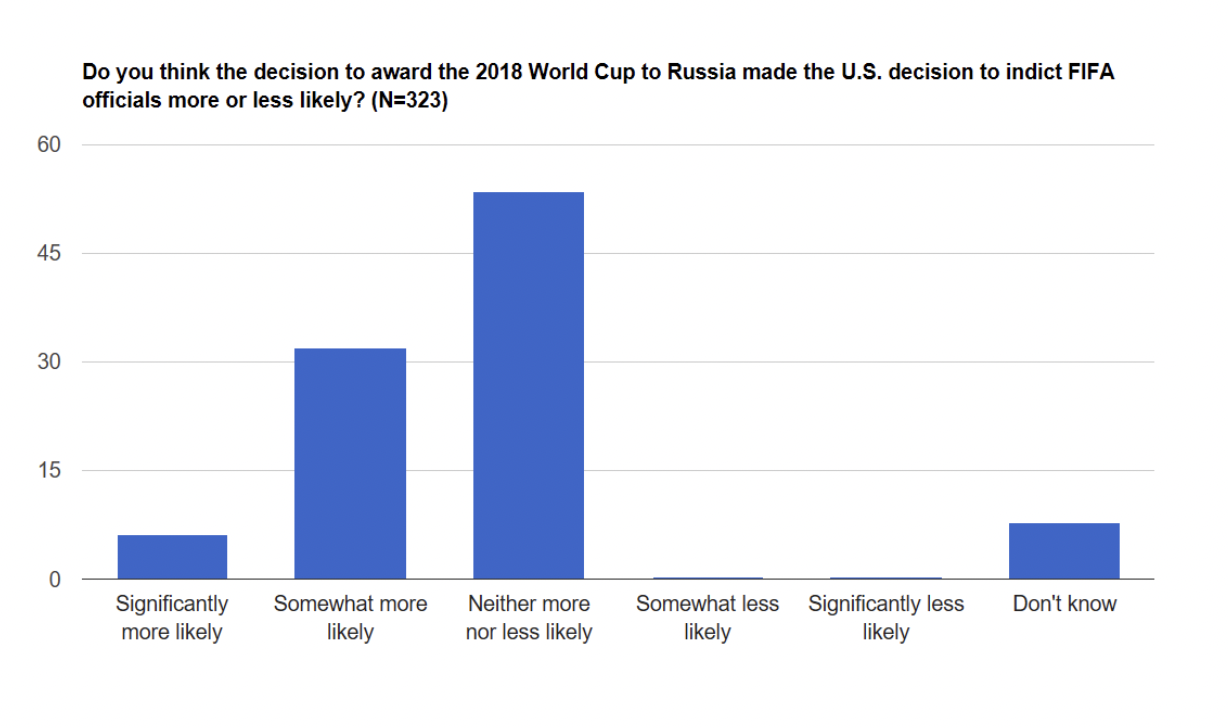 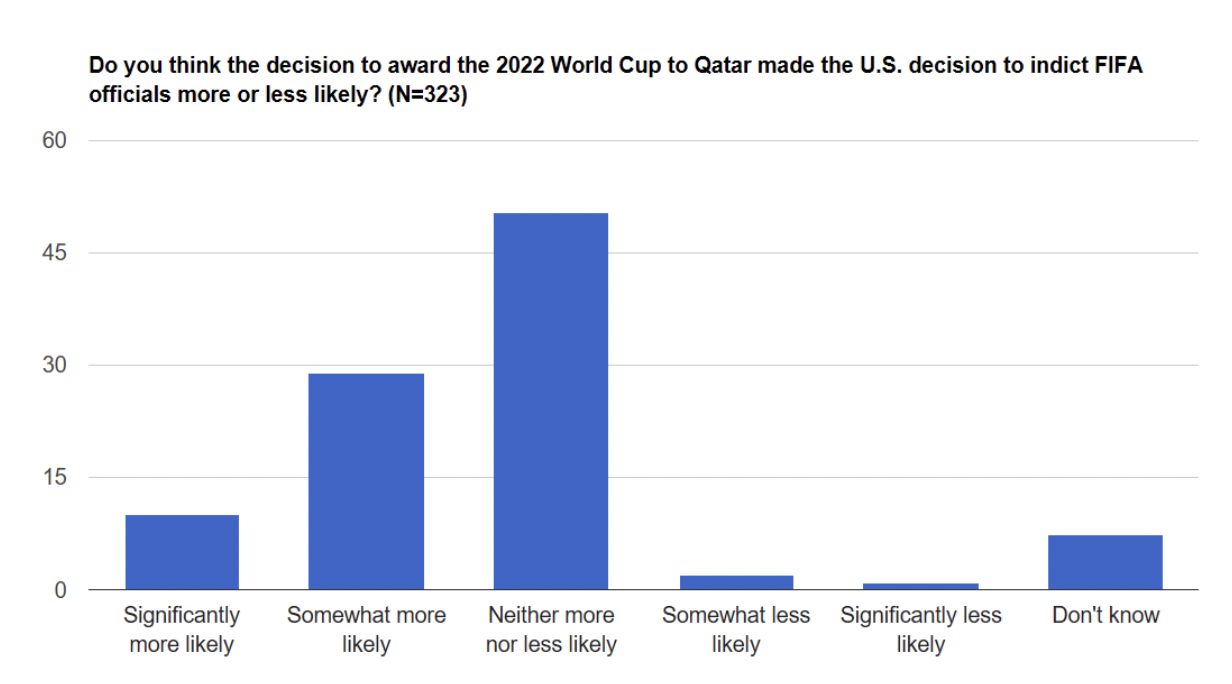 It now seems that FIFA is sailing in smoother waters. The 2018 Men’s World Cup went off without a hitch – a combined 3.572 billion people (more than half the world’s population aged four and older) watched the Cup. Due to these good times, FIFA president Gianni Infantino was just reelected to serve a second term “by acclamation,” skipping the traditional FIFA voting process . Under his reign, Infantino claimed FIFA has gone from being “toxic, almost criminal to what it should be”. Infantinio even considered expanding the World Cup’s reach from 32 to 48 teams in the 2022 World Cup.

Maliniak and Voeten’s findings, combined with FIFA hitting its stride, prompted me to reexamine the original TRIP data to see if it could provide any insight in 2019. I used the TRIP Snap Polls which polled 655 international relations scholars. I was drawn to one finding in particular. Responding to whether awarding the U.S. the 2022 World Cup would’ve made an indictment more or less likely, 49.7% of respondents (a plurality) agreed that awarding the World Cup to the U.S. would have made indictments less likely. 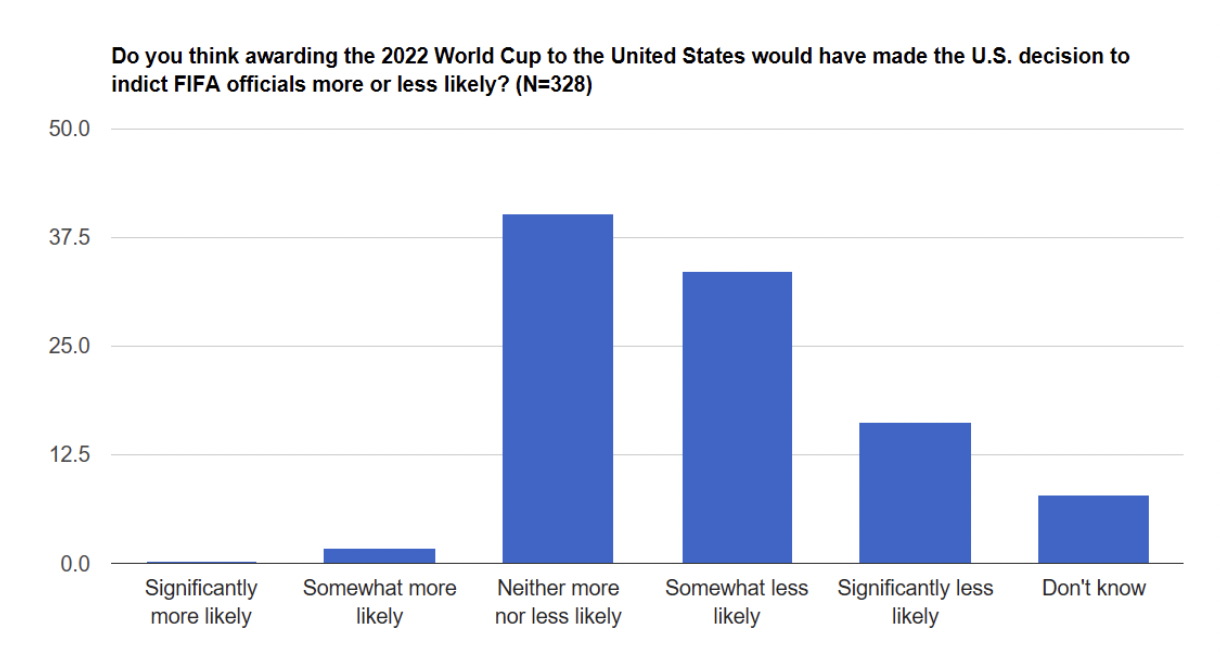 Flash forward to June 2018. On the heels of the Russian World Cup, FIFA announced that the U.S., Mexico, and Canada would host the 2026 World Cup. U.S. soccer officials saw the decision as a big win, especially after the U.S. did not qualify for the 2018 World Cup. FIFA said the financial impact was the primary motivator for its decision; U.S. officials promised the Cup would make $11 billion in profit. The aforementioned TRIP data, though, provokes questions about the authenticity of this claim. Awarding the Cup has been a historically cloudy and corrupt process. Letting the U.S. host a Cup could potentially ease international pressure (pressure that was primarily egged on by the U.S.) and further remove FIFA from the microscope. FIFA officials could not be blamed for factoring less international scrutiny into their decision-making calculus, especially when the organization is enjoying relative calm (at least for the moment).

Peter Leonard is a graduate student at William & Mary’s School of Education, where he is pursuing a degree in secondary education. He began working for TRIP in May of 2019.