In July 2008, HBO premiered its adaptation of Evan Wright’s bestselling book, Generation Kill: Devil Dogs, Iceman, Captain America and the New Face of American War. The series, which depicts the first three weeks of the Iraq War through the eyes of an elite unit of US Marines, opened to critical acclaim. Helmed by the same team behind HBO’s The Wire (David Simon and Ed Burns), the series was lauded for its realism and faithfulness to the source material. Aided by its distance to its content, Generation Kill does not claim to endorse any one evaluation of the war; instead, the audience has the benefit of 5 years of the war to contextualize the events for themselves, allowing the opportunity for multiple perspectives.

Generation Kill is a jam-packed 7 episodes, a whirlwind of men in camouflage, humvees, and sandy landscapes. The series features a sprawling ensemble cast, reinforcing the messy, complicated nature of war. When critics complained that the characters were too hard to differentiate, obscured as they are by gear and helmets, Simon responded that was his intention: “That’s how it is when you’re dropped into a unit. I wanted you to feel the initial disorientation.” The series focuses on Bravo company of the Marines’ 1st Reconnaissance Battalion, with occasional focus on its sister company, Alpha (headed by Captain Bryan Patterson). Bravo company, headed by Captain Craig Schwetje, is plagued by poor leadership, with the exception of Lt. Nathaniel Fick, who leads 2nd Platoon. The main focus of the series is the humvee hosting reporter Evan Wright, led by Sgt. Brad Colbert. The story begins in Kuwait on the eve of the invasion and follows the men on their winding journey to Baghdad.

Central to the series’ excellence is its relentless persecution of narrative itself. Scholar Joshua Clover argues that the “episodic aimlessness of David Simon’s Generation Kill […] summons up the unnarratibility of the Iraq adventure, its unreason, and inevitably the idea that there was no reason to start with.” Ironically, this lack of narrative chiefly manifests in the narratives that the characters create for themselves. These vary from personal to overarching narratives about democracy and American military might. Some of these narratives are shared, like the myth of the warrior Recon Marine. The men envision themselves as elite cold-blooded warriors—“America’s attack dogs.” This belief influences how they process events and carry out their duties; however, even this narrative is threatened by the events of the war. Espera notes that he doesn’t even feel remorse at killing anymore, asking, “Is this how true warriors feel?” To which Colbert responds, “Don’t fool yourself. We aren’t being warriors out here. They’re just using us as machine operators, semi-skilled labor.”

All of the characters operate within their own narratives of what war should be like. Sgt. Sixta (a native Nebraskan) affects a bizarre dialect because he has “decided that all sergeant-majors are supposed to talk with a Southern accent.” Captain Schwetje (nicknamed “Encino Man” because of his lack of intelligence) is a former high school quarterback who understands the world exclusively through football metaphors. Captain McGraw—also known as “Captain America”—thinks of himself and his fellow marines as heroes in a Vietnam War movie. Trombley thinks of the invasion as a game and is consequently disappointed by how little he’s fired his weapon. Lilley uses it as material for his home movie which, by the last episode, has transformed from a motivational film to a horror film. Rudy envisions the war as a warrior’s journey, but by the end, even he, who began the war meditating daily, is prone to displays of aggression. Most notably, Colbert, nicknamed the “Iceman” in Afghanistan, embodies the warrior ethos. Colbert’s moniker is well-deserved; the rest of the marines look up to him for both his skill and stoicism. However, this façade reveals itself when a member of his team accidentally shoots a young boy. Colbert, taking responsibility for the incident, is torn by the sight of the boy and emotionally withdraws from the team. His emotional response to the child’s shooting ruptures his Iceman persona, exposing the reality that war affects even the coldest of warriors. In this way, the narratives that the characters have created for themselves obscure the reality of the war and fracture the series’ overall plot.

Scattered between the firefights and offkey sing-a-longs is serious discourse over their presence in Iraq. The official line is that they are tasked with liberating the Iraqi people from Saddam Hussein. This is reinforced by their translator, Meesh, who rarely translates anything, but instead repeats a stock phrase: “They are grateful to be liberated by the Americans and look forward to working hand-in-hand here in Iraq.” The characters often return to questions of their purpose in Iraq, frequently after displays of senseless violence or bureaucratic ineptness. The series leaves the door open to the idea that the invasion was ill-advised. This is especially poignant in an exchange in episode 6:

PERSON: I knew you were a fucking gay-ass liberal. You tried to pretend by invading Iraq with us, but I knew.

WRIGHT: I’m serious, Ray. Isn’t that the whole point of us being here?

TROMBLEY: The point is we get to kill people, you dumb fuck. 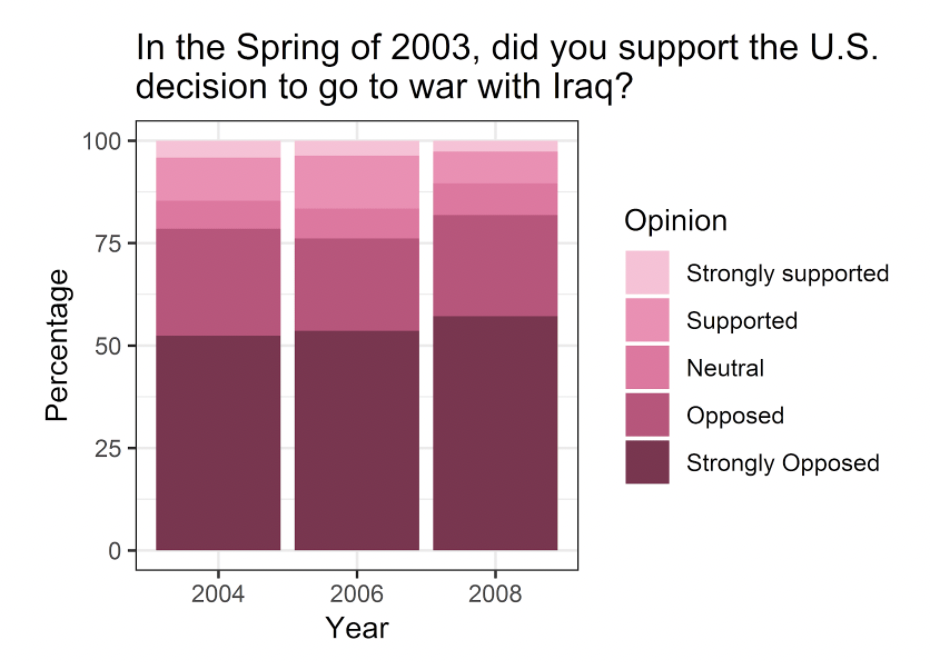 These in-universe examinations reflect the real-world debates over the invasion. The Bush administration argued that the US needed to stop the development of WMDs in Iraq, but this goal was eventually discredited after inspectors failed to find any WMDs. Instead, the administration turned its focus to ensuring US security and fighting terrorism. While public opinion showed high levels of support for the war throughout its duration, scholarly opinion was less positive. TRIP’s 2004 faculty survey found that 63% of scholars would have opposed the invasion even if Iraq did have WMDs. 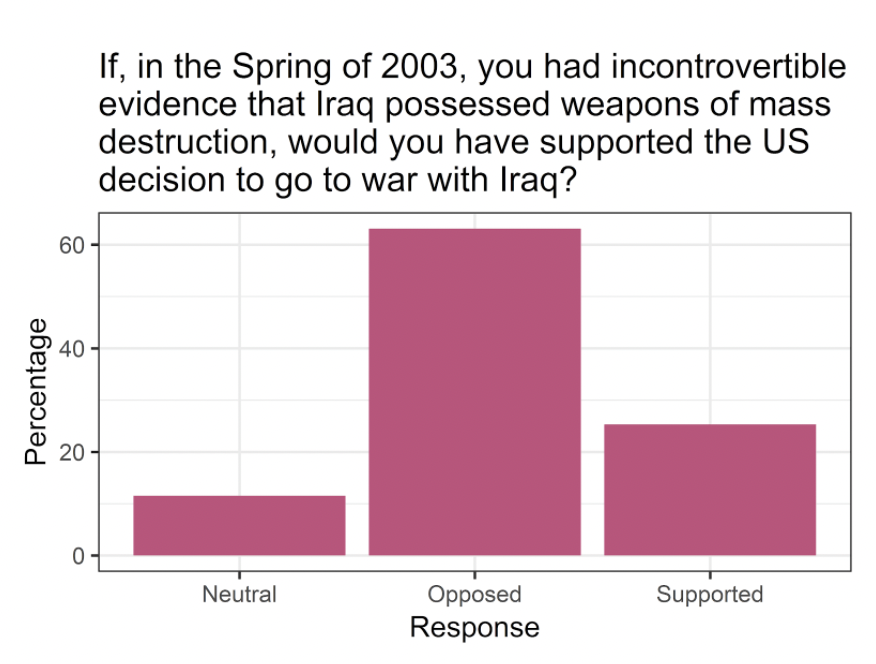 In 2002, 33 leading IR scholars placed an ad in the New York Times, arguing that “War with Iraq is not in America’s national interests;” rather, the US should concentrate on defeating al Qaeda. In TRIP’s 2004 faculty survey, 78% of scholars reported opposing or strongly opposing the decision to invade Iraq. Conversely, over 70% of the American public supported the decision to go to war with Iraq. Unlike public opinion, scholars did not experience a rally effect that would result in higher support for the war; instead, scholarly support for the war remained consistently low throughout its entire course. In 2004, only 9% of scholars believe that the invasion would benefit US interests. This again stands in opposition to public opinion, which overwhelmingly thought the war would benefit US interests and security.

While Generation Kill does not presume to make any judgement on the morality of the war, the audience is left with the nagging sense that maybe the invasion was not what it promised to be. By 2008, the rally effect and initial optimism for the war had waned, and public support for the invasion dropped to 40%. Similarly, the finale, all of the characters (with the noted exception of Trombley) have become disillusioned with the war. They can no longer bear to watch buildings blowing up or wounded civilians. Their confidence broken, they leave the set one by one, until only Trombley remains in an empty warehouse. The repeated “failure of plot”—made manifest in the meandering path to Baghdad, the ever-changing rules of engagement, the defeated narratives of the characters, and the eventual failure to solve the renewed crisis in Iraq—challenges the myth that Americans are the “conquering heroes.” As Colbert tells Person, “there are no cowboys,” because the romanticized notion of Americana has been eroded to reveal the chaos at its core.

Vera Choo is a graduate of William & Mary’s class of 2019. She majored in Political Theory, with a minor in Classical Studies. During her time as an undergraduate, Vera worked in the Social Networks and Political Psychology (SNaPP) Lab as a research assistant. Her interests include Political Theory, minority politics, politics and the media, and data analysis.