Well folks, it finally happened. If you’ve been following the democratic campaign trail, you know that we’ve finally arrived at the moment that TRIP’s been waiting for: the candidates broke the seal on foreign policy discussion. With President Trump calling for a full withdrawal of U.S. troops from Syria on October 13th, the debate on the 15th was the perfect opportunity for the democratic candidates to showcase their foreign policy platforms. While the conversation was sparked by a discussion of U.S. withdrawal from Syria, which many politicians on both sides of the aisle have spoken out about, there was a schism on the debate stage.

While all candidates onstage agreed that the U.S. should work to end military engagement in the Middle East (there have been many candidates from both parties who claimed that they would work to end the Forever War), few agreed on what direction U.S. Foreign Policy should be moving in.

In the past, TRIP has surveyed scholars about their views on effective tools of statecraft and compared their responses based on the Hawks vs. Doves spectrum: 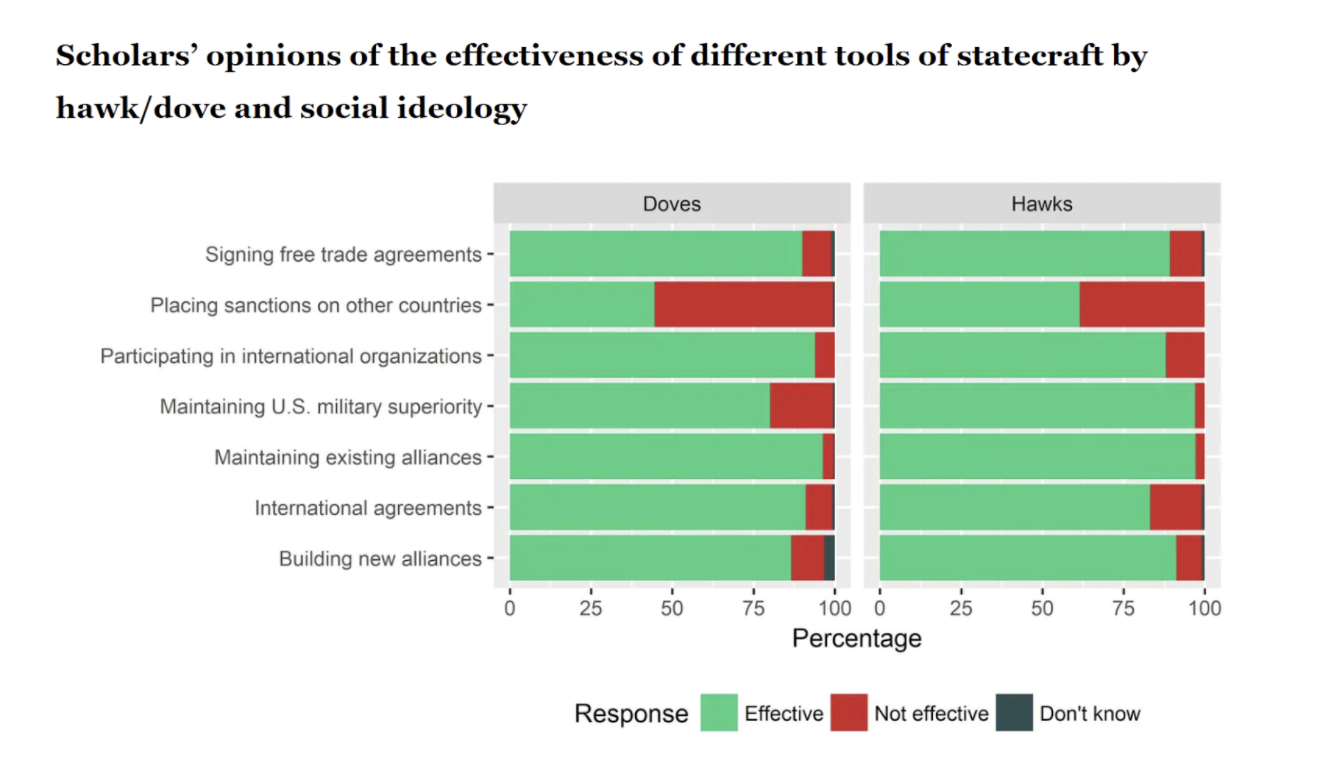 Hawks represent those more likely to favor aggressive action, including military intervention. Doves prefer to use other methods of engagement, such as diplomatic means. There is a large consensus across both groups when it comes to multilateral efforts, such as free trade agreements, maintaining existing alliances, and international agreements on the whole. Of course, the biggest divide is seen when it comes to maintaining U.S. military superiority.

Made apparent by the discourse throughout the debate, the divide between Doves and Hawks no longer falls along party lines. While many of the candidates agreed that the U.S. should work to maintain its relationships and support our allies (in the case of Syria, the Kurds), there was a split in the remaining forms of military and diplomatic engagement. On the one side, centrist, internationally-focused candidates (Biden, Buttigieg, and Klobuchar) advocate for remaining committed to our allies 100%. And on the other, more isolation-inclined candidates (Sanders, Warren, and Gabbard) present a more skeptical view of U.S. engagement abroad.

Donald Trump has also changed the Hawk-Dove binary in this sense. While he has threatened to attack countries he views as antagonistic towards the U.S. as one would expect a Hawk to do, he acts like a Dove by avoiding confrontation.

Does this division matter anymore? Can Democrats align themselves under the banner of ending wars? Will candidates commit to bringing the troops home or will they place a greater level of importance on maintaining our allies in conflict zones?

In 2020, no matter if you vote Republican or Democrat, the future of America’s foreign policy is most certainly on the ballot.

Moira Johnson is a senior at the College, majoring in Government and minoring in Physics. She has worked at TRIP since August of 2018. Her interests include Middle Eastern conflicts, Nuclear Proliferation, and the U.S. Intelligence Community.