The TRIP Twitter account recently had an insightful Tweet about the current situation unfolding in northern Syria. In the wake of the U.S. pulling out of the region, the door is open for a Turkish invasion. 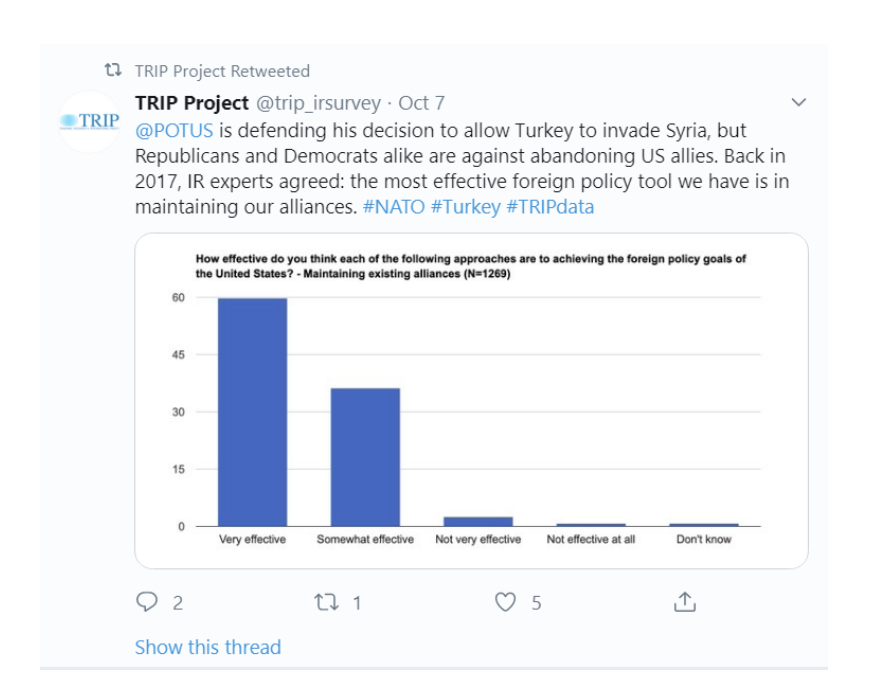 The Tweet emphasizes the importance of staying with allies, in this case our Kurdish allies. According to a 2017 survey, 96 percent of international relations experts believe that maintaining existing alliances is an effective approach to achieving foreign policy goals. I think the Tweet also raises another valuable question: given the importance of maintaining existing alliances, how should we treat our Turkish allies?

The U.S./Turkish relationship goes back hundreds of years. The alliance was especially important during the Cold War as Turkey, a NATO member, served as a check on Soviet influence in the Middle East. Flash forward to more recent times and one finds that the relationship is in murkier waters. In 2003, then-Prime Minister Recep Tayyip Erdogan did not allow the U.S. to use Turkish bases when invading Iraq. The relationship has only gone south from there.

Erdogan blamed a cleric, now living in the U.S., for instigating a 2016 failed coup attempt and demanded he be extradited to Turkey. Just before the events in Syria, Turkey went ahead with buying a Russian-made missile defense system, despite objections from both the U.S. and NATO. Now, despite President Trump’s warning of retribution if Turkey took action in northern Syria, Erdogan authorized a Turkish invasion to drive out the Kurds. The recent events beg the question of whether U.S./Turkey relations will improve or if the U.S. should back away from its Turkish allies.

Some evidence suggests that the alliance might be ill-fated and on its way out. A 2017 poll by the Pew Research Center found that 79% of Turkish respondents held unfavorable views towards the United States. Academics have a similar weariness of keeping the relationship as it stands. A 2017 TRIP poll found that a plurality of academics thought that the U.S. should not have long-term military bases in Turkey.

If one looks at Turkey’s top priorities, it is easy to see why the relationship has soured. A 2014 TRIP poll found that Turkish scholars felt conflict in the Middle East, transnational terrorism, and immigration were the three most important foreign policy issues facing Turkey. Turkey has similar concerns today. Turkey still hosts over 3 million Syrian refugees and continuously denies Kurdish claims for independence. Most of these foreign policy interests do not line up with the United States, diminishing the common ground the countries can stand on.

Despite evidence pointing to the relationship’s demise, there are also several arguments for why the alliance remains vital. The U.S. and Turkey do have one shared goal: combating ISIS. In a 2018 TRIP poll, U.S. academics still listed terrorism as one of the top five threats facing the U.S. While the U.S. and its allies reduced ISIS’s influence in the Middle East, the group still lingers long after President Trump claimed he “beat ISIS.” Turkey could play a key role in assuring that ISIS does not make a comeback.

Perhaps more importantly, the value in maintaining a relationship with Turkey goes back to the TRIP poll linked in the Tweet. Scholars overwhelmingly agree that maintaining existing alliances is an effective foreign policy tool. Allies are hard to come by in the Middle East. Losing Turkey as an ally would mean losing one of the U.S.’s few connections to the region. Worse yet, Turkey has already shown that it is willing to be friendlier with Russia. In 2014, U.S. scholars remarked that “renewed Russian assertiveness” was still a danger to U.S. foreign policy. Russia’s recent actions in Syria and elsewhere in the region only exacerbate that threat. If the U.S. turns its back on Turkey, Turkey would be further incentivized to embrace Russia as a main ally.

The situation in northern Syria is by no means over. Another blow to the relationship came when the U.S. announced it would place sanctions on Turkey over Turkey’s invasion. Turkey may not be “in the right” in this situation, but the U.S. must tread carefully with how it treats an important NATO ally.

Peter Leonard graduated from William & Mary in 2019 with degrees in Government and History. He is currently pursuing his master’s degree in secondary education at William & Mary’s School of Education, as he wants to be a high school Social Studies teacher. Peter loves hiking, playing ultimate frisbee, and watching baseball (he’s been a diehard Rockies fan since birth and was raised in Colorado.) When it comes to International Relations, Peter is interested in how regime type and structure impacts how a government functions and how accountable the government is to its people.