After months of political debate surrounding the Democratic primary, it seemed leading up to the Iowa caucus that Joe Biden was among the favorites, both in Iowa and nationally. However, after a tumultuous week for moderates, mainstream media appears to agree that Bernie Sanders has become the candidate to watch. The question is, will his foreign policy prove as divisive as his domestic policy? 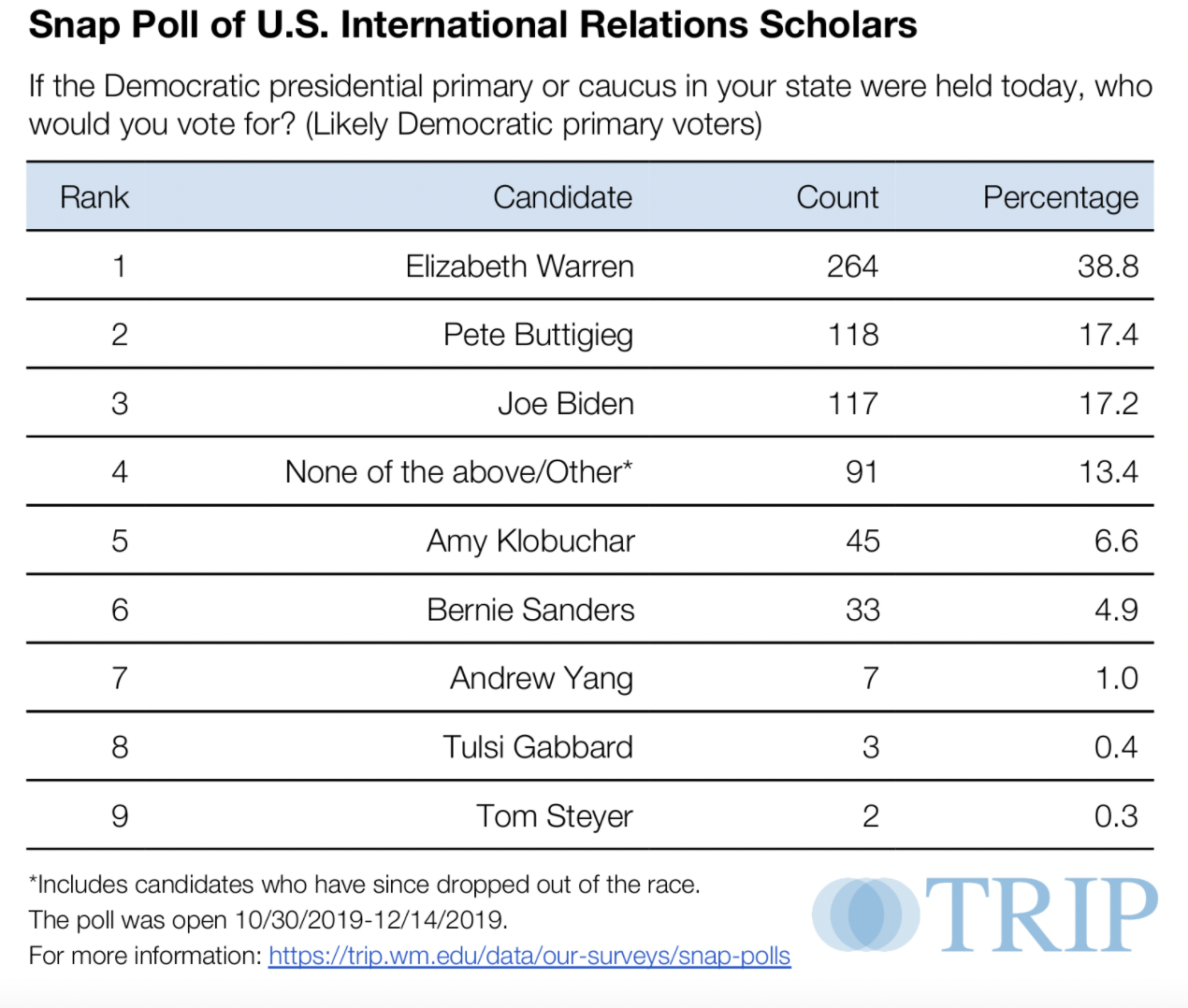 In our latest Snap Poll released in January, we asked nearly five thousand International Relations scholars what they thought about recent foreign policy issues and the democratic candidates. Surprisingly for some, Warren received the most support, with 38% of respondents, followed by Biden and Buttigieg tied at around 17% support. Remarkably, only 5% said they would vote for Bernie Sanders.

When asked which candidates would most effectively manage foreign policy, about 40% of respondents chose Joe Biden, a full 23% more than Warren and 27% more than Buttigieg. Again, only 5% of respondents selected Bernie Sanders. And even among those, I suspect it is a lot of the same people who said they would vote for him in the previous question. 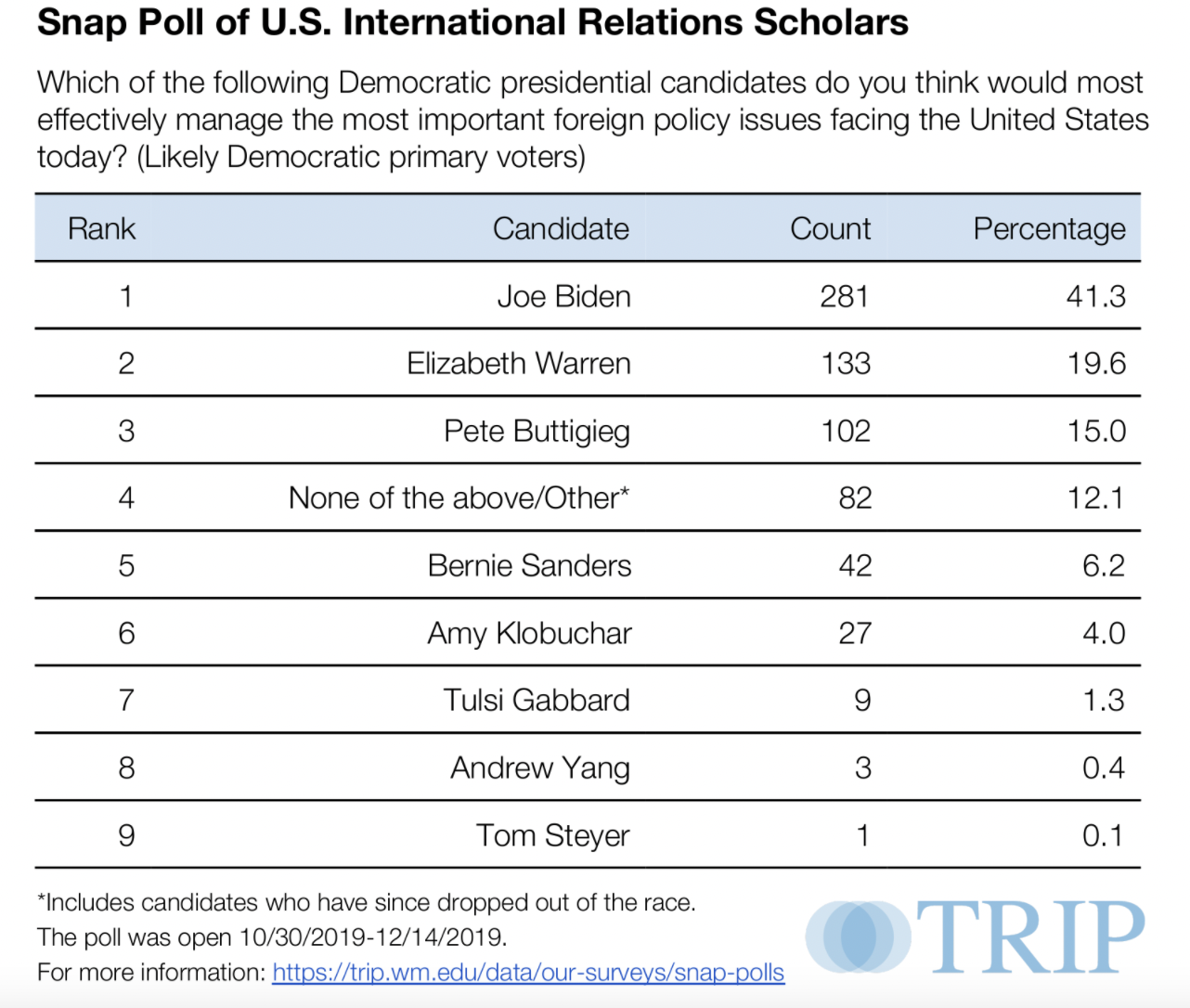 Despite recent coverage praising Sanders’ foreign policy in the newspapers last week and some recent gains in the polls, why is the academic community so hesitant to back him relative to the other candidates? Considering Bernie Sanders’ go-to foreign policy talking point is his opposition to the Iraq War in 2003, which experts also opposed, one would think he would be preferable to candidates like Biden who originally supported the war (although he has since expressed regret).

One explanation could be that Bernie Sanders lacks foreign policy experience. He has never served in the military, has no direct experience in International Relations research, academia, or policy, and he does not conduct diplomacy in his role as Senator. That is a leg up that Biden, who served in a diplomatic capacity as Vice President, and Buttigieg, who served in Afghanistan, have on him. If most foreign policy related think tanks, government agencies, and newspapers believe time abroad in the area of study is a critical credential a competitive candidate, why should it not be for the white house?

However, despite his lack of experience in the real world of foreign affairs, Sanders does agree with the majority of international relations scholars and Warren, Biden, and Buttigieg (for the most part) in their support for the JCPOA, non-proliferation, cutting military spending, and avoiding unnecessary escalation and intervention, so he is not completely ignorant.

More likely, the controversy comes from Sanders’ foreign policy beliefs on trade. He has openly opposed the Trans Pacific Partnership (TPP), the North American Free Trade Agreement (NAFTA), and is generally against free trade, which is a pretty unpopular opinion among scholars. In Snap Polls IV and XI, 70% of scholars said they supported the TPP, 80% supported NAFTA, and 94.6% supported Free Trade in general. In foreign policy analysis that is about as close to a consensus as you get. In International Relations and Economic theory, economic interconnectivity is one of the major incentives for peace, and scholars recognize that.

In last year’s Snap Poll, 78% of respondents indicated that they believe the respect America gets abroad is a matter of large importance, and 94% of respondents believe America’s respect in the world has diminished during the Trump presidency. Another prescient fear academics likely experience is that Sanders’ divisive views on domestic politics and controversial self-identification with democratic socialism will cast him as an ideologically driven but practically incapable Wilsonian who could further dampen the White House’s legitimacy abroad. At a time where our support is of critical importance in places like South East Asia and Iraqi Kurdistan, it makes sense that scholars would want to elect a candidate who has the ability to garner support (either from his own base or across the aisle) for intervention if necessary and the expertise required to know when to. In this light, a likeable candidate with foreign policy experience like Biden or Buttigieg would sensibly be a better option.

As Wednesday’s debate approaches, I hope the discussion of the candidate’s foreign policies does not end here. The more we discuss foreign policy, the more thoroughly we can analyze the viability of each of our candidates as future heads-of-state and commanders-in-chief, and the more we can remind the public of the importance of international relations experience.

Lucas Arnett is a proud member of William & Mary’s class of 2022. He’s  interested in going into the field of International Relations, ideally starting with the Peace Corps and then settling into a calmer desk job as an analyst after a few years. On campus, Lucas is involved with the WM Debate Society, the Eco Schools Leadership Initiative (ESLI), and the Catholic church. A fun fact about Lucas is that his ancestors founded a town in the Midwest called Arnettsville, which still bears his family’s name to this day.