With the world seemingly on pause for the last few months because of COVID-19, the top priority of the world’s governments has generally been to flatten the curve and protect its citizens from the virus’s rapid spread. However, some regimes have utilized lockdowns to suppress citizen protest movements, and conversely, new movements and new forms of protest have emerged from the pandemic. In a myriad of ways, this pandemic is shaping the way people protest. 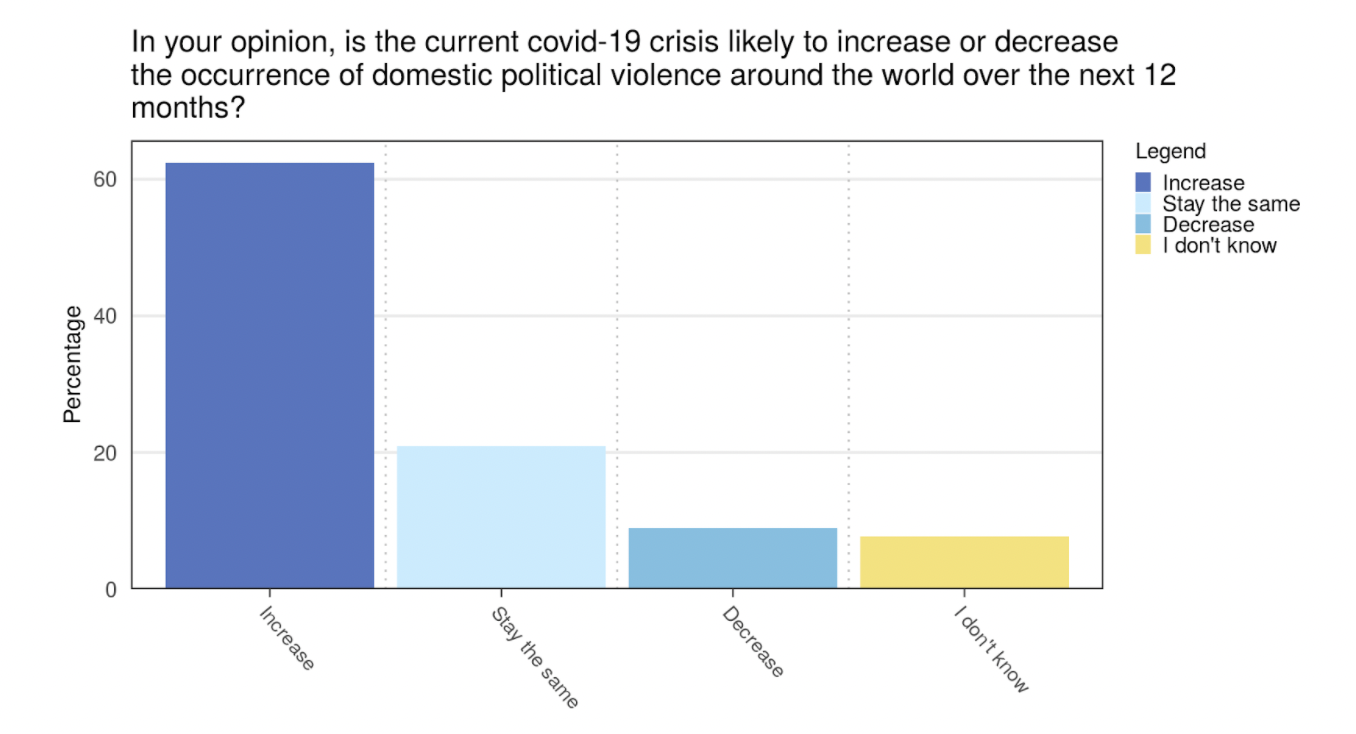 Algeria, which was mostly unaffected by the 2011 Arab Spring protests throughout the Middle East and North Africa, saw mass protests emerge on February 22nd, 2019 when the now-former President Abdelaziz Bouteflika announced his bid for a fifth term candidacy for president. Bouteflika had served as president since 1999, and ever since suffering from a stroke in 2013, he had been essentially incapacitated and served more as a ceremonial figure while the political elite and military ruled. A diverse group of protesters took to the streets every Friday to demand the fall of the regime, an end to the country’s widespread corruption, and an increase in economic opportunity and political freedom. The protests resulted in significant regime concessions such as constitutional reform and eventual military-prompted resignation of Bouteflika, but protests continued every Friday until the pandemic hit the country as they felt that their demands had not yet been met. While Bouteflika had been removed, the regime itself remained, and protesters were calling for a civilian, not military lead state where repression abounded.

With 11,031 confirmed cases of the COVID-19 virus in the country since February 2020, government-mandated quarantine and curfew measures were certainly necessary and arguably effective in slowing the progression of the virus. These measures not only worked to stop the spread of COVID-19 but also to curb the momentum of anti-regime protest. Narrowly-elected President Abdelmajid Tebboune has utilized this lull to quietly arrest major protest leaders and participants, as to stem protests from reemerging once the country reopens. However it does not look like COVID-19 and subsequent repression will be able to prevent protest revival, as this movement has seen popular support by a majority of Algerians and has remained steadfast despite regime attempts at repression and granting of minor concessions to quell protests.

In Iran, mass protests began in November 2019 in response to an increase in fuel prices and a continually stalling economy. The country has a separate macroeconomy in which students and adults work part-time as taxi/uber drivers or food delivery people in order to substitute regular income, or as a primary source of income. This system is reliant on fuel prices remaining stable and when the government unexpectedly increased fuel prices, citizens took to the streets. These price increases can be understood as being indirectly caused by U.S. withdrawal from the Joint Comprehensive Plan Of Action that provided significant sanctions relief for Iran. The U.S. has since reapplied harsher economic sanctions that have stalled the country’s economy and directly affected everyday citizens.

While protests initially began as peaceful gatherings, they quickly escalated to violence with a high degree of international media coverage and swift suppression by the regime. A key tactic used by the government to quell protests was an internet blackout in which protestors could not post online to organize, and military/police violence that resulted in 1,000 + deaths and worked to quickly end the protests. However, citizens soon returned to the streets for a different reason, this time in solidarity with the regime following the death of General Qasem Soleimani, at the hands of a U.S. targeted airstrike. While funeral processions initially brought the government and people together, marches quickly turned back to anti-regime protest with the announcement of the Iranian military downing a Ukrainian airline plane that killed all passengers aboard, many being Iranian citizens. These anti-military and anti-regime protests continued until COVID-19 arrived. The country has so far seen 192,49 cases of the virus, and 9,065 deaths, giving the regime ample reason to enact quarantine measures to slow the spread. The regime has also used the outbreak as a reason to suppress and prevent protest, even using deadly force against prisoners protesting against unsafe conditions that could lead to COVID-19 contraction in prisons.

Amidst the COVID-19 global outbreak, we have in some cases seen new protests emerge. In Israel, Prime Minister Benjamin Netanyahu (Likud) joined with opposition candidate Benny Gantz (Israel Resilience Party, Blue and White coalition) to form a unity government in response to the pandemic. There had been three previous elections in which neither candidate could gain a majority or form a government. In this unity government, Netanyahu will remain PM with Gantz as Alternative PM, which has angered many of Gantz supporters who see this unity government as conceding to the ruling coalition. In response to this new coalition and ongoing corruption within the government (Netanyahu is facing several corruption charges), Israeli protestors assembled for a socially-distant protest on April 19, 2020. This anti-corruption rally demonstrated how citizens can continue to voice dissent in the wake of COVID-19 as protestors stood about two meters apart each, with facial coverings to prevent the spread of the virus as best as they could. The regime has been able to somewhat control protests as protests in April hoping to advocate against Netanyahu’s plan to annex the West Bank were told that they were prohibited from protesting in a major Tel Aviv square due to COVID-19 related regulations. However, in recent weeks protestors have been able to successfully gather, following social distancing measures to protest against the coming annexation with little pushback from the regime.

Protests emerged nationwide in the U.S., and eventually globally after the killing of George Floyd, an unarmed Black man, by Derek Chauvin, a white police officer who knelt on his neck for 8 minutes and 46 seconds as three other officers watched. While George Floyd’s murder may have been the spark that set off the protests, they are also addressing the unjust murders of Breonna Taylor, Ahmaud Arbery, Tony McDade, and countless other Black Americans who have lost their lives because of police brutality, white supremacy, and systematic racism. Protests like this have been seen in the U.S. before, notably after the murders of Trayvon Martin, Michael Brown, and Sandra Bland, but something about these new protests feels different.

First, these protests have illuminated to a broad audience the reality of white privilege, as the recent movements contrast sharply to rallies that occurred in weeks prior where mostly white protestors called states to lift stay-at-home orders and chanted for their right to not wear a mask or to get a haircut. Many of us have had extensive time at home because of this virus to reflect on the events currently happening and educate ourselves on white privilege, what it means to be Black in America, and how we can become anti-racist. Also, the relevance of social media is greater than ever, allowing organizers to quickly disseminate information about local protests, and allowing us to share important resources such as petitions, bail funds, and contact information of lawmakers. All of these aspects have allowed the movement to gain momentum and exert significant influence in the age of COVID-19.

However, there are notable barriers to the success of this movement, one of which is the virus, as we are seeing a sharp uptick in cases in the past few weeks. It is important to mention that many of these new cases are a result of states reopening and large gatherings that occurred over Memorial Day weekend. That being said, with a lack of social distancing measures at many protests, we will likely see an increase in the number of cases related to these events. While these new cases may be used to discredit and limit the protests, they will ultimately affect the protestors themselves who are at higher risk for contracting the virus when organizing in large groups. Another significant roadblock is the president’s efforts to repress these protests, at times calling for violence against his own citizens. The president has thus far utilized the National Guard to clear the streets of DC for a photo-op and has proclaimed that as the “law and order president” he will use all means necessary to apprehend “domestic terrorists” involved in these protests.

Each of these cases demonstrates how despite a global pandemic, citizens will find a way to protest, and that the pandemic in many ways has acted as the impetus needed to spark a movement. It will be interesting to see how these protests continue to develop in the midst of COVID-19 and how protestors will adapt to these conditions in a way that grows these movements. With 62.46% of scholars responding to the TRIP Snap Poll XIII that COVID-19 is likely to increase the occurrence of domestic political violence around the world over the next 12 months, it is clear that protests movements, violent or peaceful are here to stay.