Public impeachment hearings are now underway, with the first held on Wednesday, November 13th and a second on Friday, November 15th. The House and the public are anxiously awaiting testimonies from career public servants tied up in the Ukraine scandal. Much of the inquiry into the now-infamous phone call between U.S. President Donald J. Trump and Ukrainian President Volodymyr Zelensky on July 25th has focused on the question of a quid pro quo, or if President Trump’s actions in pressuring Ukraine to investigate his political rivals constitute justification for his removal from office. However, the portions of the hearing focused on foreign aid to Ukraine can be difficult to follow. What was this aid being used for? How do scholars view aid, and how does that differ from how Trump views this aid?

The purpose of the U.S. aid to Ukraine is simple: to assist and protect a key U.S. ally in the east from their increasingly hawkish neighbor and historical U.S. adversary Russia. This aid includes monetary and military aid that provides training, weapons, and basic provisions such as medical supplies and uniforms for the Ukrainian military. The delivery of this aid is where it gets complicated. The aid package was approved by Congress and sent to Ukraine every year since the 2014 Russian annexation of Crimea. That is, until this summer when the package was withheld by President Trump for two months before it was finally released due to bipartisan pressure in Congress. This hold on the aid had many in Washington questioning the president’s motives behind this move. Why would he withhold aid from a key U.S. ally who needed it so desperately?

An initial assumption, held by many observers, was that this had to do with Trump’s complicated yet cozy relationship with Russian President Vladimir Putin. This assumption was later dispelled by findings in the whistleblower report released on September 26th. The whistleblower revealed that a conversation had occurred between President Trump and President Zelensky where Trump pressured Zelensky to investigate Joe Biden’s son Hunter Biden, who had conducted business in Ukraine, on the basis of illegal or corrupt conduct by the young Biden. This report began to raise concerns that Trump had not only pressured a foreign leader to investigate his political rival for his own personal gain, but also had linked the request to the hold on foreign aid; as a result, many labeled this interaction a quid pro quo.

Trump’s willingness to trade foreign aid essential to Ukrainian security for his personal political agenda shows his disregard for the important role of foreign aid in protecting our allies abroad  One might argue that he views aid simply as a means of advancing his own interests, ignoring its true purpose to aid countries in security, development, and protection of human rights. One might expect the U.S. president to treat aid with more sensitivity and less volatility, but of course Trump is not a typical president. According to scholars polled in the 2018 TRIP Snap Poll XI, this unpredictable behavior is expected from Trump, and not seen as an effective tactic. 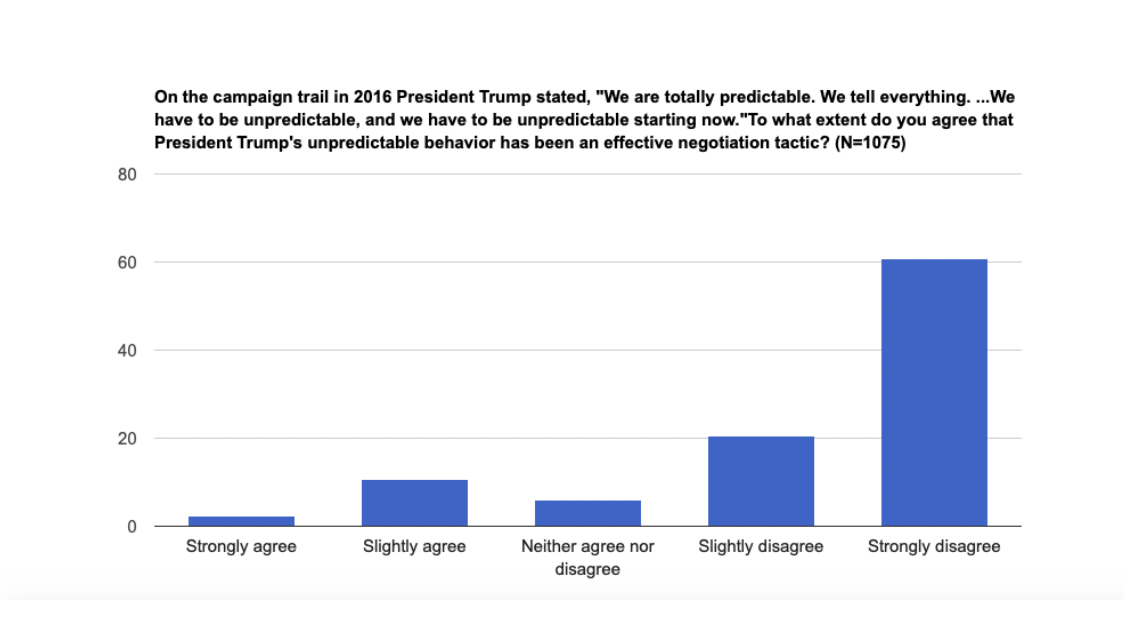 While Trump’s personal motives behind this proposed exchange of aid for investigation are apparent, he isn’t the only one who views aid as a tool to advance interest. Also in the 2018 TRIP Snap Poll XI, scholars were asked how they would advise the U.S. government to respond to an increase in foreign aid spending by China. 39.01% of respondents stated that they would advise an increase in U.S. foreign aid spending to compete with China, while 33.89% of respondents would advise the U.S. government to seek to coordinate development spending in collaboration with China.

These top two responses indicate that respondents also view aid as a strategic tool with the capacity to counter Chinese influence and advance U.S. interests. Both these scholars and Trump see the strategic benefits that aid can provide. Despite similarities, a key difference between scholarly perspectives and Trump’s view on aid is that while scholars view it as a tool for U.S. foreign policy, Trump tends to interweave personal and public objectives, often advocating for policy that advances his business and adds to his personal wealth. 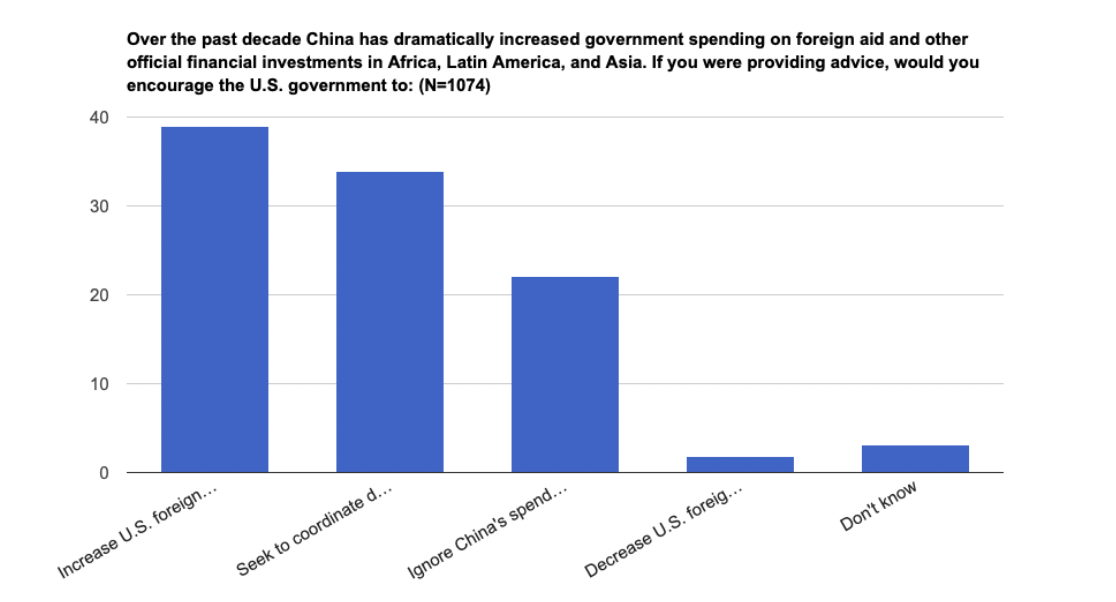 This brings us back to the Ukraine incident. Scholars agree that aid is a necessary tool to advance U.S. foreign policy. Some might argue that Trump’s leveraging of the Ukrainian aid package was not only justified, but a normal interaction between two world leaders to achieve their policy goals. However, that argument can be disputed by the personal objectives behind Trump’s actions; investigation of a political rival is not a national objective, but rather a clearly personal motivation. In condemning Trump’s actions, one might also consider looking at broader views of U.S. foreign aid. Should we shift away from the realist view of foreign aid as an instrument to be leveraged for national interests towards a more liberal view that aid should be issued with the intention to uplift countries through economic, social, and political change? The U.S. can still advance its interests in foreign policy through greater consideration of the impact and allocation of foreign aid. U.S. interests can align with global humanitarian interests if we pave a way for using aid for good.