In the TRIP 2017 Faculty Survey, scholars in Egypt, Jordan, and Lebanon were asked “What are the three most important foreign policy problems facing [Respondent Country] today?” A significant issue that was present in each country’s top three response options was the issue of regional disintegration, with 100% of scholars noting this issue in Egypt, 60% in Jordan, and 25% in Lebanon. Regional disintegration refers to a lack of cohesion or shared identity between states in the Middle East and North Africa (MENA) region. Regional integration has been very important in the ancient and modern political history of the MENA, and the region’s current lack thereof is clearly an issue of great importance to scholars in Egypt, Jordan, and Lebanon.  To understand the extent and importance of this disintegration, I’ll analyze past attempts at regional cohesion throughout  MENA, possible reasons for current disintegration, and offer my thoughts on what a potential regional conglomerate could look like in the future. 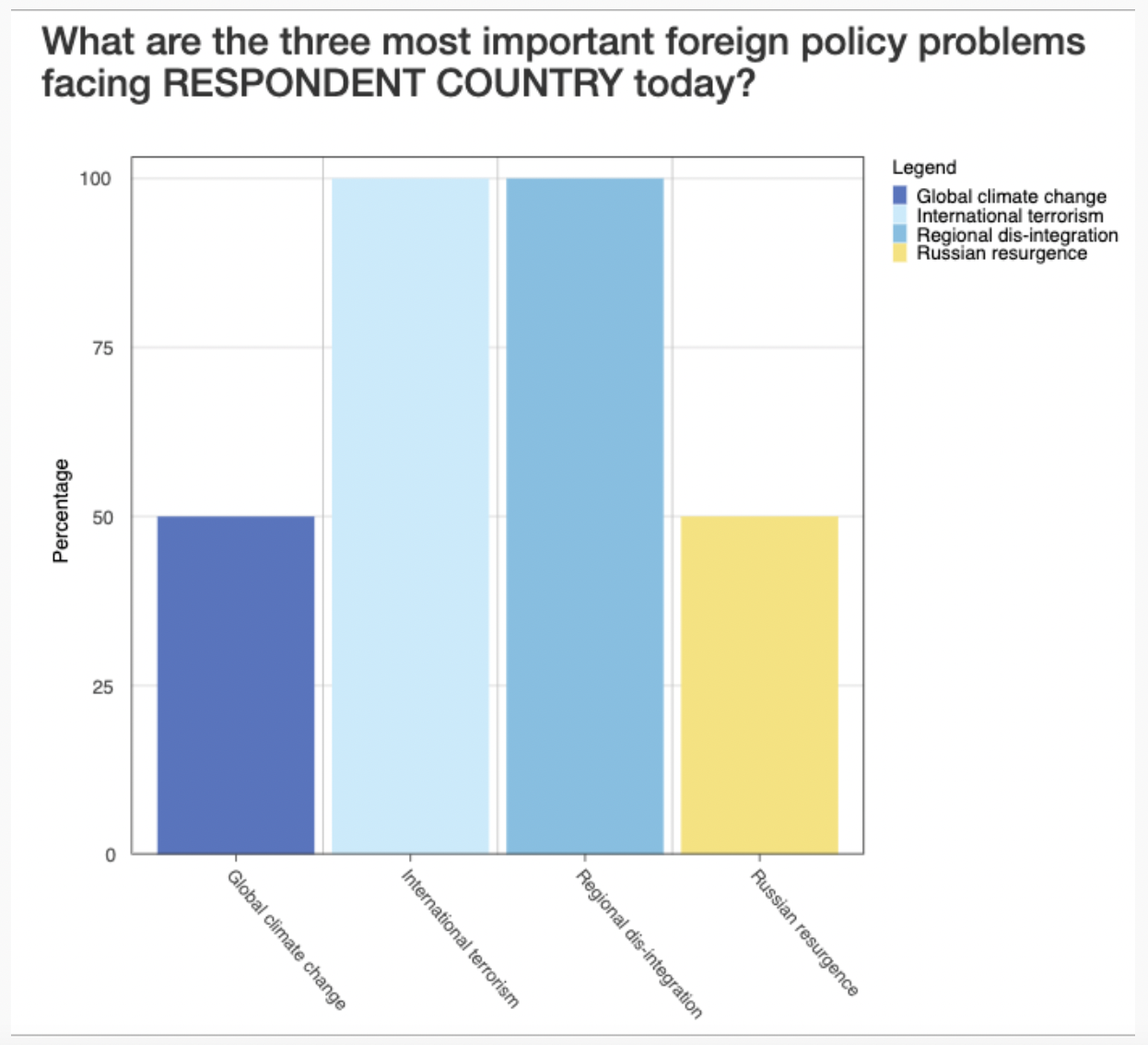 Historic integration of the region stems from the first Islamic state: the Rashidun Caliphate, which ruled the region from 632, after the death of the Prophet Muhammad, to 661 CE. The three other most prominent Caliphates include the Umayyad, Abbasid, and Ottoman Caliphates, with the Ottoman being the last, collapsing in 1923 under the pressure of Western interference post-world war one. The roots of modern regional integration in the MENA begin in 1928 with the founding of the Islamist group: the Muslim Brotherhood, founded by Egyptian teacher Hassan al-Banna. The organization rejected western influence and imperialism, seeking the rise of a free Islamic state as the solution to regional instability. However, with the rise of the Free Officers Movement in Egypt, the Muslim Brotherhood was coopted by the movement as they provided support for the 1952 coup d’etat but then were forcibly secularized once Free Officer Gamal Abdel Nasser came to power. Nasser’s political movement of Pan-Arabism, which integrated concepts of Arab nationalism and socialism, advocated for unity between Arab states against western influences. While the movement originated from the Syrian Ba’ath Party, it was popularized by Nasser who made Pan-Arabism policy in Egypt and helped to spread the movement throughout the region through diplomatic partnerships and alliances with other MENA countries. With the fall of Nasser in 1970, the subsequent end of Pan Arabism, and extensive foreign intervention in the region, a fractured MENA has emerged and scholars in three of these countries clearly see this as a significant foreign policy issue.

Previous bodies that have strived to create unity between Arab or MENA states include but are not limited to the Arab League, the Gulf Cooperation Council, the Maghreb Arab Union,  the Pan-Arab Free Trade Agreement, and the Agadir Agreement. The Arab League¹ was founded in 1945 with the primary goal to strengthen relationships and coordinate policies between the MENA countries. The goals of this body have not been achieved due to two major roadblocks; arguments over leadership, and conflicts between member countries due to the large scale of the group. The Gulf Cooperation Council(GCC)², a smaller more homogenous group,  was founded in 1981 as a political and economic alliance between Gulf states. The GCC can be seen as one of the most successful regional bodies in the MENA, due in part to the close geographic proximity, similar governments, and similar socioeconomic situations of member states. The Maghreb Arab Union³, founded in 1989, sought to achieve policy coordination, a shared identity, and free movement of people, goods, and services between member states. It was ultimately ineffective in achieving these goals due to Morocco-Algeria tensions, Libya-Mauritania tensions,  and the continuing issue of Western Sahara sovereignty. The Pan-Arab Free Trade Agreement⁴, founded in 1997, aimed to decrease barriers to trade between countries to improve their economies, but despite increasing inter-regional trade, it ultimately had little impact on each of the countries’ individual economies. The Agadir Agreement⁵ founded in 2004 acted as a free trade agreement with the main goals included establishing free trade between member states and eventually creating a Mediterranean-European Free Trade Area by cooperating with the EU. These goals have not been achieved due to member state conflicts and blockades to a free trade area by the US.

In recent years any semblance of regional integration can be seen to be split down the middle with many states in the MENA taking sides in the Iran v. Saudi proxy conflict, that has primarily played out in the Yemeni civil war. To provide context for this regional rivalry, Iran (a majority Shia Islam country) and Saudi Arabia (a majority Sunni Islam country) have an ongoing sectarian-based conflict that has yet to devolve into all-out warfare directly against each other but has resulted in neighboring countries picking sides and regional meddling in order to exert influence. The Arab Spring uprisings in a few countries have exerted significant influence over this proxy conflict, as they have often acted as battlegrounds for this conflict to play out. In Bahrain, Syria, and Yemen, Iran and Saudi Arabia have aided and armed opposing sides of each uprising, arguably contributing to the escalation from protest movements to full-blown civil wars in some cases. This rivalry is also another major barrier to full regional integration that will need to be overcome to foster future collaboration.

The future of MENA regional integration may look grim, but there remains great potential for strong economic regional cooperation. A key economic suggestion for overcoming historical obstacles to large-scale collaboration would be for Arab countries to work on coordinating a cohesive trade policy for intraregional and interregional trade. Intraregional trade policy should focus on essentially eliminating all tariffs, quotas, and non-tariff barriers to trade between these countries, while still fostering some protection of vulnerable industries within the region from competition with more developed countries on global markets. Any Arab trade conglomerate would hopefully not advocate solely for protectionism which would be to their detriment, but instead, advocate for strategic protectionism that still allows consumers access to global markets, but still allows Arab industries to compete (think infant industry protection- A. Hamilton). Additionally, Arab states should strive to form a strong voting/negotiating coalition among them for World Trade Organization rounds/ ministerial conferences in order to approach these meetings with common regional stances, allowing them to actually pass rules/treaties that favor Less Developed Countries/benefit the region. Solutions across economic dimensions do not necessarily solve the barrier to integration that is the Saudi/Iranian rivalry, based on religious/cultural divides. However,  I believe that focusing on full economic integration first would help eliminate barriers to further integration such as the aforementioned conflict and commitment problems, as well as facilitate future collaboration through issue-linking and regulating repeating interactions between states. There is still much work to be done in order for these states to actualize integration, but the legacies of the Caliphate, Pan-Arabism, and contemporary economic collaboration, regional integration is both possible and realistic in the Middle East and North Africa.