International Relations scholars have a mixed record in the challenging game of geopolitical predictions, but it hasn’t shaken their confidence.

The TRIP Project occasionally asks IR scholars to make timely predictions on key international security and economic issues. Previous posts have fairly criticized the academy for faulty predictions despite their advanced training. The failures, while important to consider, overshadow an impressive record of successful predictions.

The academy’s successful predictions, often masked by misfires, are worth a second look. In 2015, 72 percent of IR scholars thought the likelihood of violent confrontation in the South China Sea was unlikely before 2020. Military tensions have cooled despite aggressive Chinese actions (with tensions possibly diverted to economic issues). The same year, 76 percent expected Greece to maintain the Euro despite concern that the government needed more economic autonomy.

In the middle of President Obama’s second term, 61 percent of scholars predicted the US would maintain military aid to Egypt in the future. The level of military aid to Egypt has barely changed since, remaining between 1.1 and 1.3 billion dollars annually. Three-quarters of IR scholars believe the executive branch controls military aid to Egypt. Given the vast ideological and policy differences between the Obama and Trump administrations, this suggests a deep understanding of U.S. strategic interests.

The JCPOA (Iran Nuclear Agreement) generated genuine concern about a lack of sufficient monitoring and enforcement mechanisms. Despite these concerns, in 2015, IR scholars predicted that Iran would comply with the agreement. 64 percent believed Iran would allow IAEA inspection of nuclear facilities and uranium supply chains. 60 percent believed the agreement would successfully limit uranium enrichment. Despite the valid concerns about the scope of the JCPOA, earlier this year IAEA monitors maintained that Iran remained in compliance. In 2015, we asked scholars how a future American unilateral withdrawal would affect the likelihood of Iran renewing its nuclear weapons program. 85 percent of scholars believed it would increase the likelihood. IR scholars may have been correct: Iran has increased its stockpile of low-enriched uranium by 6 percent since February and intends to break the agreement to pressure the remaining parties. In the past week, Iranian spokesmen announced that the country’s production of enriched uranium would surpass the JCPOA limit of 300 kilograms by June 27 and that American sanctions on Foreign Minister Zarif and Supreme Leader Khamenei “means the permanent closure of the doors of diplomacy.”

These successful predictions suggest that the academy’s record is stronger than it initially appears. IR scholars’ confident predictions indicate that they think the world should listen. However, it is unclear if their confidence stems from deeper understanding or human overconfidence.

Scholars are confident in their predictions, regardless of the content.

TRIP’s recent Snap Polls asks scholars to estimate the likelihood of war between the United States and China, Russia, and North Korea in the next ten years, and then asks scholars to rate their confidence in their answer. 58 percent of scholars reported an average confidence level of at least 6 out of 10, indicating they were more confident than not in their grand geopolitical predictions. There is no difference in confidence between respondents who think war is likely versus those who do not. This confidence appears unjustified for predictions that may be “problematic” at best. At the extreme, 10 of 11 scholars who foresee zero chance of war with our major adversaries are more confident than not in their answers. 9 of 10 scholars who rate the average chance of war above eight out of ten are more confident than not in their answers. The fact that scholars are most confident in the extreme ends of the spectrum of possible predictions is perplexing if IR scholars understand international affairs better than the rest of us.

Liberal and male scholars are more confident than conservative and female scholars in their predictions, but neither the ideology nor gender gap explains why IR scholars expect to win a losing game. 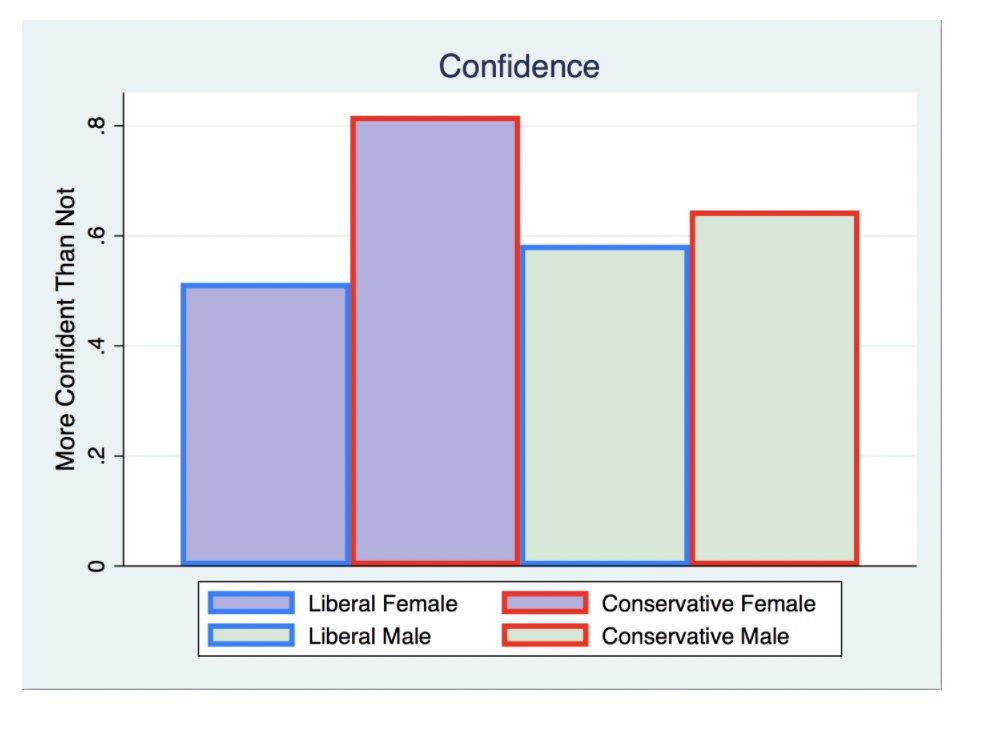 IR scholars strongly believe in their predictions regardless of ideology or gender, and their recent track record is more positive than previous reports have indicated. Accurate geopolitical predictions are intrinsically valuable: they signal an invaluable understanding of strategy and politics, and might serve as a resource to scholars and policymakers who seek to prepare for the future. Still, more research is needed to examine the reasoning for scholars’ predictions and to understand why many IR scholars are so confident in their answers.